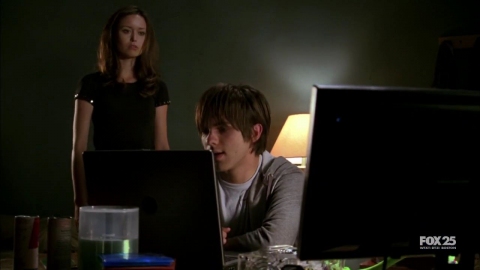 "John?" Cameron said as she stood in the doorway to his bedroom. "What is a soul?" A simple question who's answer was anything but.

John looked up form his computer. "uhh, what?" John heard her just fine, but had no idea how to answer the question, so he stalled.

"What is a soul?" Cameron repeated the question. "I don't understand exactly what one is. The dictionary has twelve definitions of the word 'soul', most of which seem to have something to do with religion, some referring to emotion. What context did you mean when you were preparing to remove my chip? You said I didn't have a soul, and I never would. Your tone of voice implied that this fact was a bad thing."

John leaned back in his chair and exhaled deeply. How am I supposed to answer that? "Well, you can't possibly have a soul in the religious sense, since you weren't born, but built from parts in a factory." That seemed like a safe enough answer, and hopefully she would process the logic in it and drop the subject.

She didn't. She walked in and sat on his bed next to where he was sitting at his computer desk. "What about the other definitions of 'soul'? Do I possess 'emotional soul'?"

John placed his hands behind his head and shrugged. "You tell me. Do you feel anything when you do or see certain things?"

She tilted her head and thought for a second. "When I get shot or hit with something my sensory receptors send data to..."

"That's not what I mean." John interrupted. He sighed. How can I explain colors to the blind? "OK...Derek said that he saw you ballet dancing in your room. You were done talking to the teacher, and you didn't have to practice it any more. So why did you dance?"

Her eyebrows rose a bit, and she looked John in the eyes. "I don't know."

John had been suspecting for some time that she was capable of having emotions, as diluted and primitive as they might be. "I think you did it because you wanted to. Because it made you happy. Do you have any...unknown processes in that chip of yours when you dance?"

"Yes. There were some anomalous data files being created when I was dancing. They seemed to arrange other files and make things more efficient in my file structure. Almost like a virus, but one that increases efficiency instead of corrupting. It also seemed to eliminate fragmented thoughts, and...I don't know how to explain it...it made me feel good. I thought it was helpful, so I continued to dance even after my mission no longer required it."

John smiled. "In your own weird way, I think you just described what it's like to be happy...sort of."

Cameron smiled and said, "I'm happy that I can experience happiness." Her smile faded after a few seconds. "The effects of happiness do not last very long. How else can I obtain happiness?"

This is so weird, John thought, What am I? Some kind of robot psychologist? "Well...there are lots of things that make me happy. Good food, friends, music, making a perfect shot with a gun..."

"Yes. I like that too," she said quickly, her eyes widening.

John laughed at that, which in turn made Cameron smile. "Odd," she said. "Your smile and laughter gives me a slight feeling of happiness." John stuttered, feeling a bit awkward, and looked away. In attempt to steer the direction of the conversation somewhere else, he asked her about other emotions. "I seems like you have a handle on the happiness thing, what about sadness?"

"I don't know if I've ever experienced sadness. I don't see a reason to do so though. It seems to have such a negative effect on humans."

"It's all part of having a soul, Cameron. If you can feel sad, it makes feeling happy that much better. For now, just think of sadness as the opposite of happiness. But sometimes sadness can be a good thing. Most truly brilliant artwork is the result of sadness and angst."

Cameron returned a "does not compute" look on her face. "How does emotion create artwork? I thought talent created artwork?"

"It doesn't." John paused again, trying to determine how to explain such abstract concepts to a machine. "It's like...a printing machine can make a perfect reprint of Van Gough's 'Starry Night', so it has talent, but the printer couldn't make the painting without being told what to print. Get it?"

John continued, "Artwork is intended to express the emotion that the artist was feeling when he created it. Talent is what allows the artist to express his emotions through his art." John could still see the confusion on Cameron's face. "Take music for example..." If there was one form of art that a robot could understand, it would have to be music. Music is essentially mathematical and is made up of varying harmonic frequencies and rhythms. John clicked his mouse a couple of times, and a song started playing through his computer speakers. "This is the spring movement from Vivaldi's four seasons."

Cameron just sat, listening for a minute. With a faint smile, she said, "This piece of music makes me feel happy."

"Not necessarily. I just said lots of great art was created from tortured artists...emotionally tortured artists...they were sad." John kept adding clarification to his statement until Cameron's face changed from confused to understanding. "If you want music written by sad emotion, let's listen to some blues music." John scrolled through the playlist on his computer's media player program. "OK. Cameron, close your eyes, and concentrate on only what you hear when I play this song. Also keep in mind, although I'm not sure if it matters to you, being a Terminator and all, but keep in mind that the guitarist performing this song died in a helicopter crash." A click of the mouse and "Little Wing" as played by Stevie Ray Vaughan started to play. "It's all I can come up with off the top of my head, but if you have a soul, this should reach out and touch it."

Cameron sat silently and unmoving listening to the song play. As the song continued and began to gain momentum, Cameron's head would twitch or move ever so slightly whenever a key change would take place, or a powerful chord was sounded. When the song finally ended with a soft trill note, John instructed Cameron to open her eyes. To his astonishment, her eyes were very glassy, with some moisture pooled on the bottom lid and in the corners of her eyes ready to be pushed out onto her cheek with a firm blink. Johns jaw was agape as he saw the killing machine in front of him forming tears in its eyes. He was speechless for almost half a minute before he finally spoke to her. "H-how do you feel?"

She smiled and blinked, causing the lone tear that was waiting in the corner of her eye to roll down her cheek. "I feel... happy, and the opposite of happy...at the same time. How is that possible?"

"Does this mean I have a soul?" Cameron asked hopefully.

"ahh... I don't know. I think it might." John said, bashfully scratching his head behind his ear.

Cameron stood up from the bed, smiling. "That makes me happy," She said then walked to the door of his room.

John, still amazed at what had just transpired, took a deep breath to calm himself. Had he just witnessed a sign of true artificial intelligence? Cameron was so human that it scared him now.

Before she got to the door she stopped and turned around. "John?"

John wasn't sure he could take another volley of unanswerable questions. He sighed and said, "What?"

John shook his head a little, not in answer to her question, but in frustration. Then he said sharply, "No. Now leave me alone, I have to finish studying." It pained him to say that since he knew she now had the ability to feel sadness, and though very subtly, that is definitely what he saw on her face when he spoke. It was harsh, but he didn't want to have to explain the 100 other questions that would follow if he had said "yes", or even "it's possible".

"OK. I'll leave you alone now. Thank you for explaining."


Back to TermFan1980's fanfic page